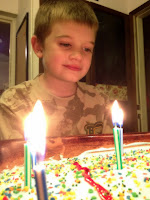 We celebrated the 10th birthday of our favorite son (being he is our only one) yesterday!  10 years old! I can still remember thinking we were never going to have a boy.  After having 5 girls, it was hard being optimistic! But God answered our prayers and gave us a precious baby boy.  He is and always has been such a sweetheart.  I love him dearly, and our family wouldn't be complete without him.

On a side note, Gracie started talking again!  Maybe it was Reb's birthday that kicked her in gear!  For those who don't know what has transpired...it's not like I'm lacking in my blog writing or anything...(ahem). 2 weeks ago we had a yard sale, and needless to say, we all got extremely sun-burned...(let me emphasize here, my husband warned us ahead of time about getting burnt...but what can I say, we are a bunch of hard headed females, ...right?) Anyway, Thursday evening, Grace hyperventilated (or at least that's what we thought). We figured that the pain of the sunburn caused it, or at least triggered it. Then again on Friday evening she did it again.  But this time we called the paramedics over...they are just down the road from us...and they helped to get her breathing normal again.  But by this time, we were a little worried about why she would do it 2 days in a row.

Then Saturday, late morning/early afternoon, she laid down on the couch and fell asleep.  After about an hour, she looked as if she was going into the same motions of hyperventilation again, but this time we were unable to rouse her.  She was having trouble breathing, tossing around on the couch, and making noises like she was trying to wake up.  We tried for about 10  minutes to get her to wake up, but to no avail.  My husband grabbed her up and put her in the van, and we took off to the ER.  All the way there she kept making some kind of moaning sound.  After arriving at the ER, within 15 minutes,  her eyes opened, but she couldn't talk and she continued making this strange moaning noise.  They took blood and did an EKG and CAT Scan.  All tests came back normal.  After being there for 5 hours, they let us go, with NO answers, and she was still unable to talk.  By the end of the day, she could communicate on her iPod through texting, but we were clueless as to what had happened. Oh, let me also say, that during this time it has also been extremely difficult for her to walk.  She said she had terrible pain in her legs, especially her knees.

Anyway, this went on  for over a week, and finally we are able to say she is back to her old self!  The pain in her legs was gone by this past Saturday and she started talking again yesterday.  We have an appointment with a neurologist tomorrow, and we are hoping they can shed some light on what happened.  I ask that you continue to keep her in your prayers.  We would like to have answers, but we also know that sometimes it can be difficult finding out neurological disorders...if it is that.  It is all in God's hands. It is so good to have the old Gracie back though! 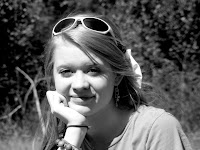 Thank you, Lord, for your blessings on our family!

"And these words, which I command thee this day, shall be in thine heart: And thou shalt teach them diligently unto thy children, and shalt talk of them when thou sittest in thine house, and when thou walkest by the way, and when thou liest down, and when thou risest up." -Deuteronomy 6:6-7